Amid many uncertainties, the decoration of the future Altar of the Fatherland gets underway

In June 1908, when the artistic directorship of the Vittoriano was by now entrusted to the triumvirate of architects consisting of Gaetano Koch (1849-1910), Manfredo Manfredi (1859-1927) and Pio Piacentini (1846-1928), the competition for the sculptural decoration of the central area of the Vittoriano was announced. Despite the precise wishes of Sacconi, the debate on its function as Altar of the Fatherland and on the subjects to be implemented there had continued, almost always accompanied by controversy.

The death of Sacconi and his legacy 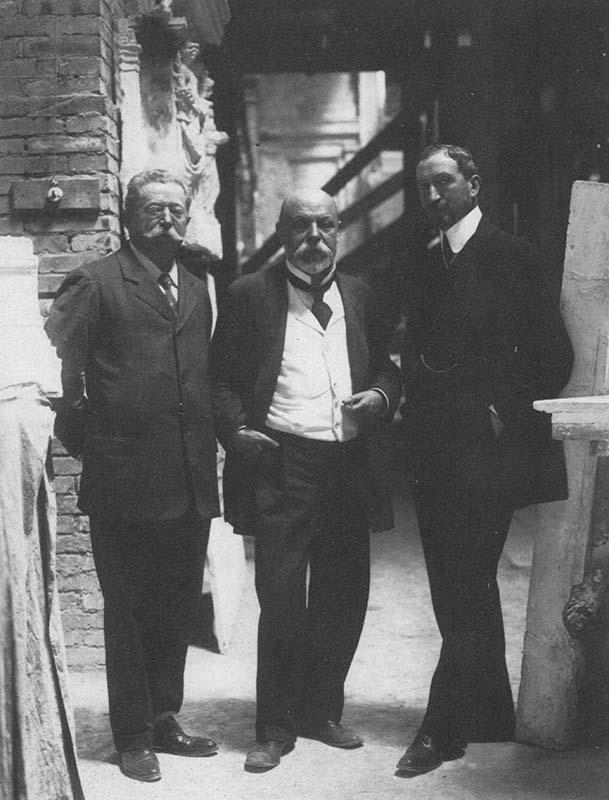 Koch, Piacentini and Manfredi: the architects entrusted with supervising the design and decoration of the Vittoriano following the death of Giuseppe Sacconi in 1905

The competition announcement fully reflects this climate of uncertainty: by merely indicating the central area as the "plinth of the equestrian statue of the king", the text left a significant freedom of choice between the historical option and the allegorical one. Participants could decide whether to represent the breach of Porta Pia and the plebiscite of Rome, the precursors of the Italian Risorgimento or any corresponding representation inspired by the civil and political significance of the Monument.

Construction of the Vittoriano under way in 1906