The words written many years earlier by Giuseppe Mazzini certainly rang in the ears of Giuseppe Sacconi (1854-1905) when he entered the competition to design the Vittoriano in 1882. From the very beginning, in fact, the architect had included plans for a panoramic terrace at the top of the monument. From here, it would be possible to fully understand the meaning of his project, i.e., the connection between Rome’s grand past, filled with Emperors and Popes, and Rome’s present, as the newly established capital of Italy.

competition for the Vittoriano 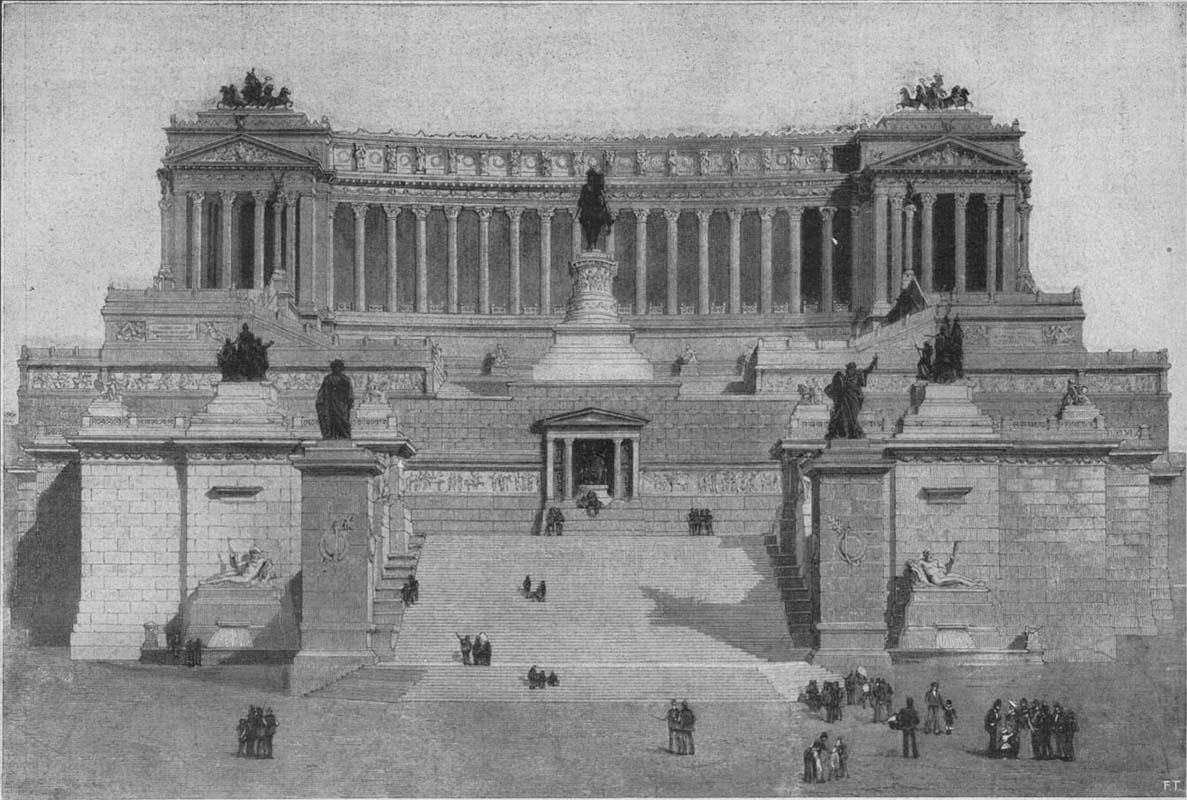 Design by architect Giuseppe Sacconi, winner of the second competitive tender for the project

For the foundation stone laying ceremony in 1885  Sacconi was careful to add a pole to the bell tower of the Basilica of St Mary of the Aracoeli - which is located 58 metres above Piazza Venezia - to demonstrate to those present the height of his planned terrace and the quadrigae on the propylaea. From that moment - one commentator wrote at the time - it was clear that the terrace would offer a singular view of the Eternal City. 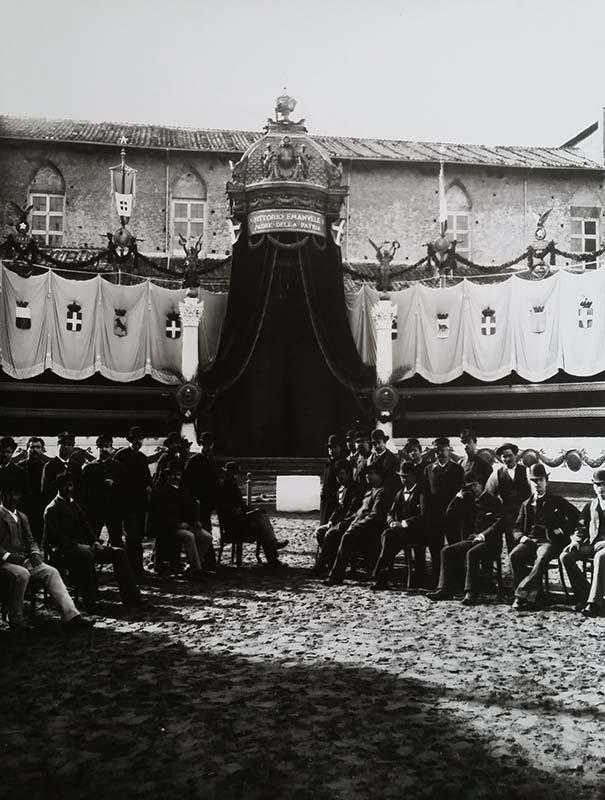 Laying of the first stone of the Vittoriano, 22 March 1885

In the winning project in 1884 Sacconi had designed two quadrigae standing on top of the two propylaea, on either side of the terrace. In his mind, the quadrigae, which are two chariots pulled by four pairs of horses and guided by a charioteer, should be dedicated to the two fundamental values of monument, Unity to the east, and Freedom to the west. 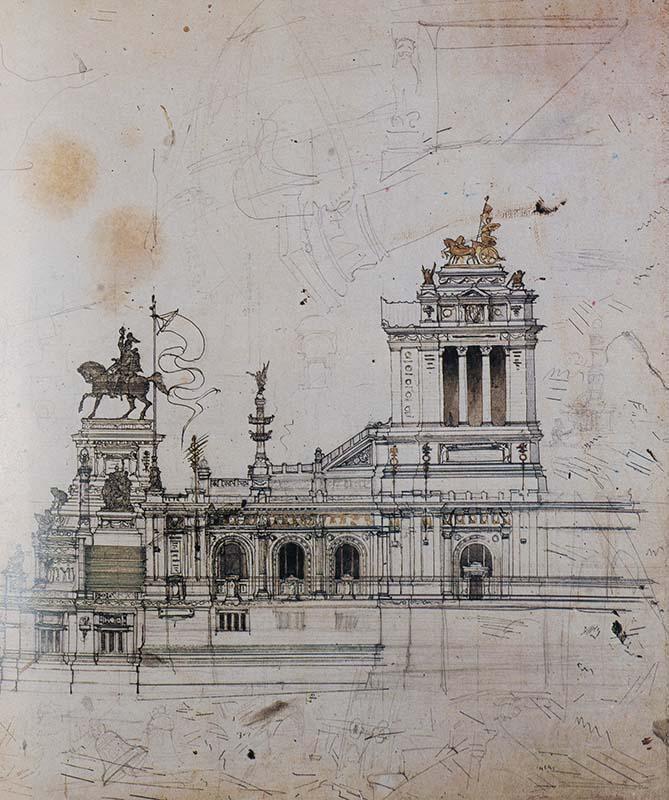 Watercolour-drawing of the outline of the Monument to Victor Emmanuel II by Sacconi, including the winged victories and horse-drawn chariots (quadrigae) in bronze (top right) 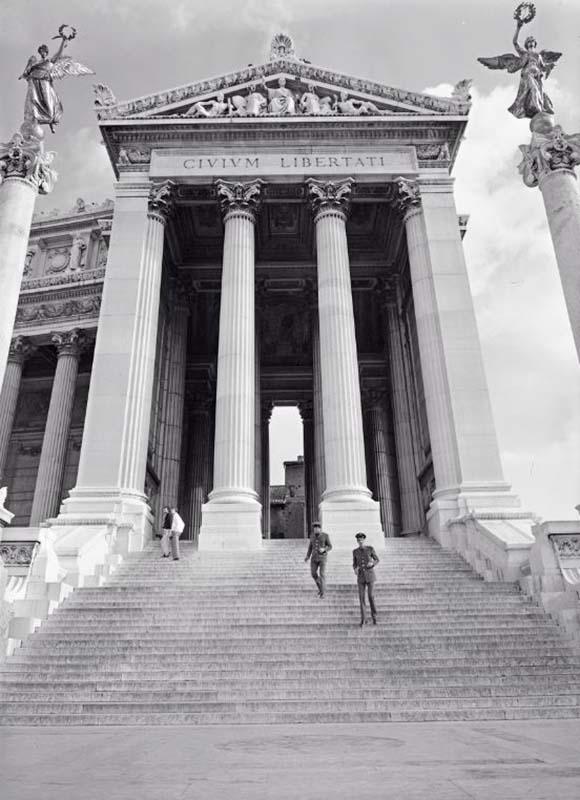 The Propylaeum of Liberty on the Monument to Victor Emmanuel II

Sacconi derived the iconography of the quadriga from the classical world. Chariots were widespread in Greece, among other things as a result the races that took place in the ancient Olympic games from 680 BCE. From Greece, their use spread to Etruria and, from there, to Rome: during the Republican Era, victorious commanders made their way along the Via Sacra up to the Capitoline Hill on a chariot pulled by four white horses. Inspired by the chariot of Apollo, god of the sun, the quadriga thus became one of the symbols par excellence of triumph and glory, as attested by the bronze Horses of Saint Mark, today located on St Mark’s Basilica in Venice. 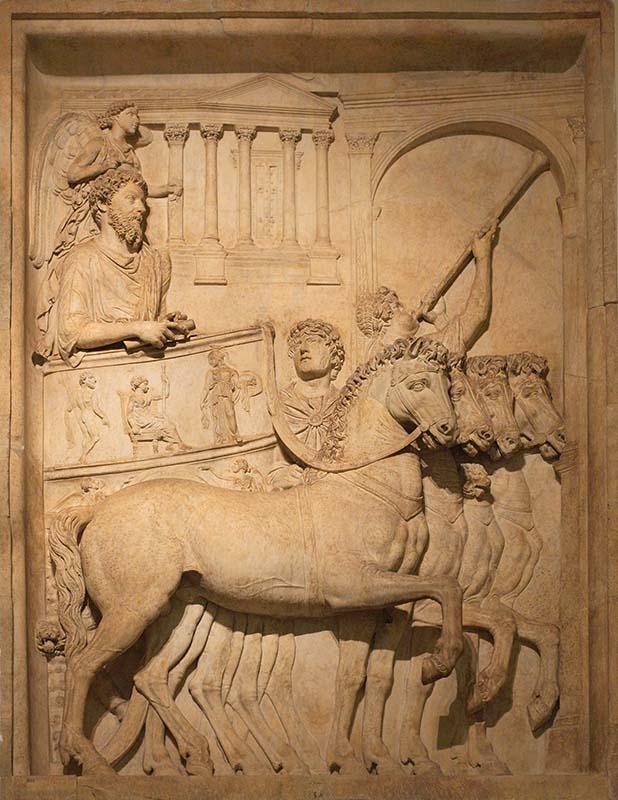 Bas relief depicting the Triumph of Marcus Aurelius which originally decorated a triumphal arch at the base of the Capitoline hill near the Roman Forum, erected to promote the emperor's victories over the Germans and the Sarmitans, now in the collection of the Capitoline Museums, Rome 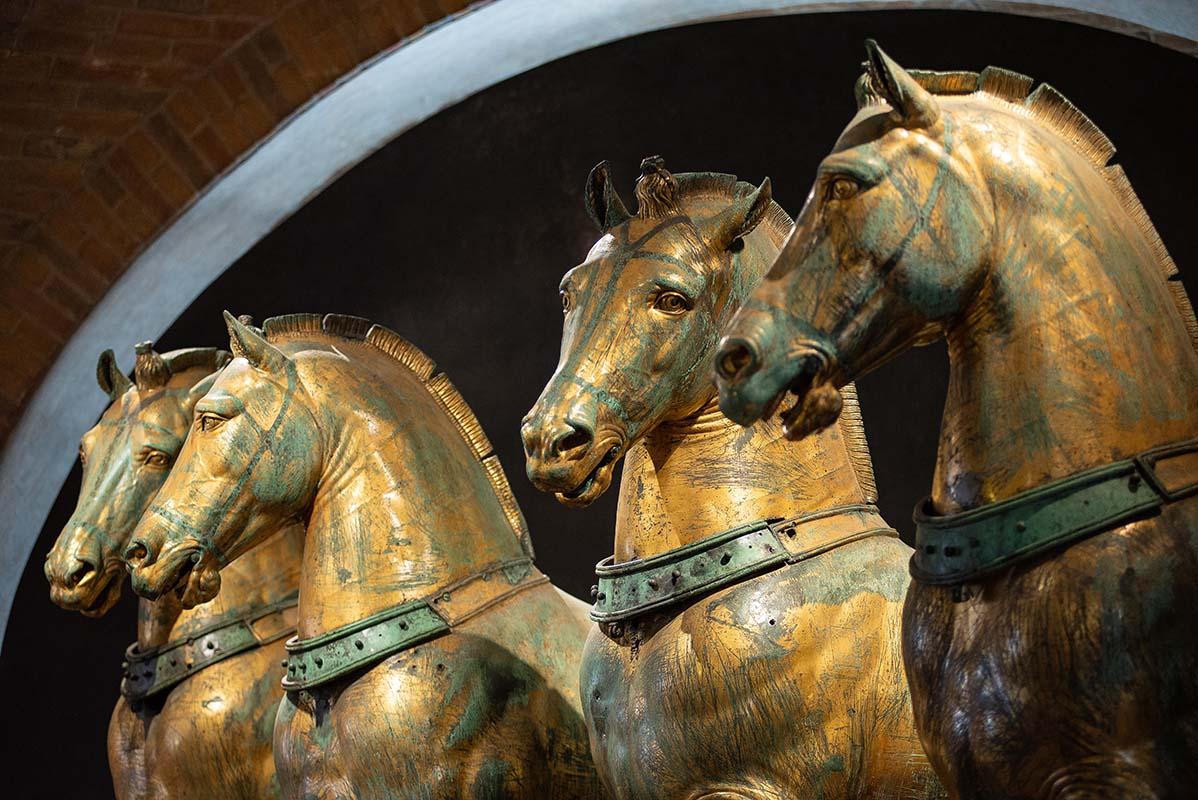 Bronze horses of the Quadriga of Saint Mark's Basilica in Venice, now in the basilica’s museum for safekeeping from the elements. Identical copies now decorate the pronaos of the Venetian church