A vast, majestic space that evokes great deeds and narrates the lives of people who lived over a period of more than five centuries

The room was built by Pietro Barbo, immediately after his election to the papacy under the name Paul II (1464-1471) as a reception room: the goal was to expand and embellish the palace he had lived in as cardinal to transform it into an alternative residence to the Vatican.

The name by which this room is still known today is due to a planisphere, which was originally located in the centre of the western wall, now lost. Originally believed to have been commissioned by Pope Paul II himself, and therefore, attributed to the Venetian cartographer, Girolamo Bellavista, who is documented as having been in Rome during Paul II’s pontificate, it was actually commissioned after his death by his nephew Marco Barbo (1420-1491): in 1489 he even turned to Lorenzo the Magnificent (1449-1492), ruler of Florence, to send some more up-to-date geographical maps to use as a model. 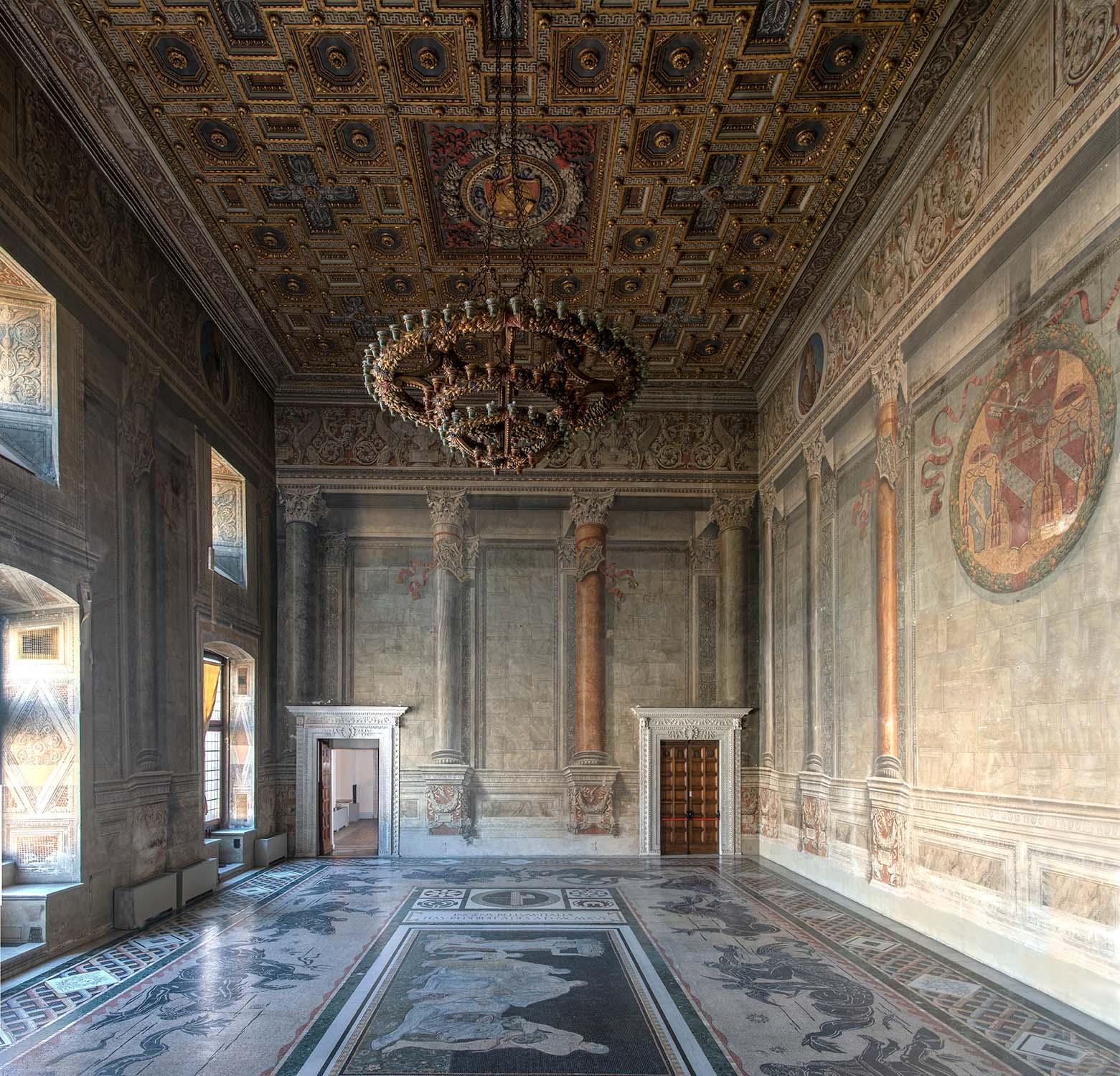 Used by the popes to welcome guests until the end of the sixteenth century – here Pope Paul III (1534-1546) met  Emperor Charles V (1500-1558) and established the convocation of the Council of Trent – the room was used for a variety of purposes during the seventeenth and eighteenth centuries.

It was used as the location of newly established Museum of the Palazzo Venezia in the first decade of the twentieth century, but it was subsequently chosen by Benito Mussolini to establish his own headquarters: he placed his desk next to the fireplace, and the dictator worked in this room, received guests and harangued the crowd from the balcony just outside. Returned to its use as a museum after World War II, the room first held the permanent collections. Then, starting in the 1980s, it was used for temporary exhibitions, and in 2016, it became a permanent part of the rooms open to the public. 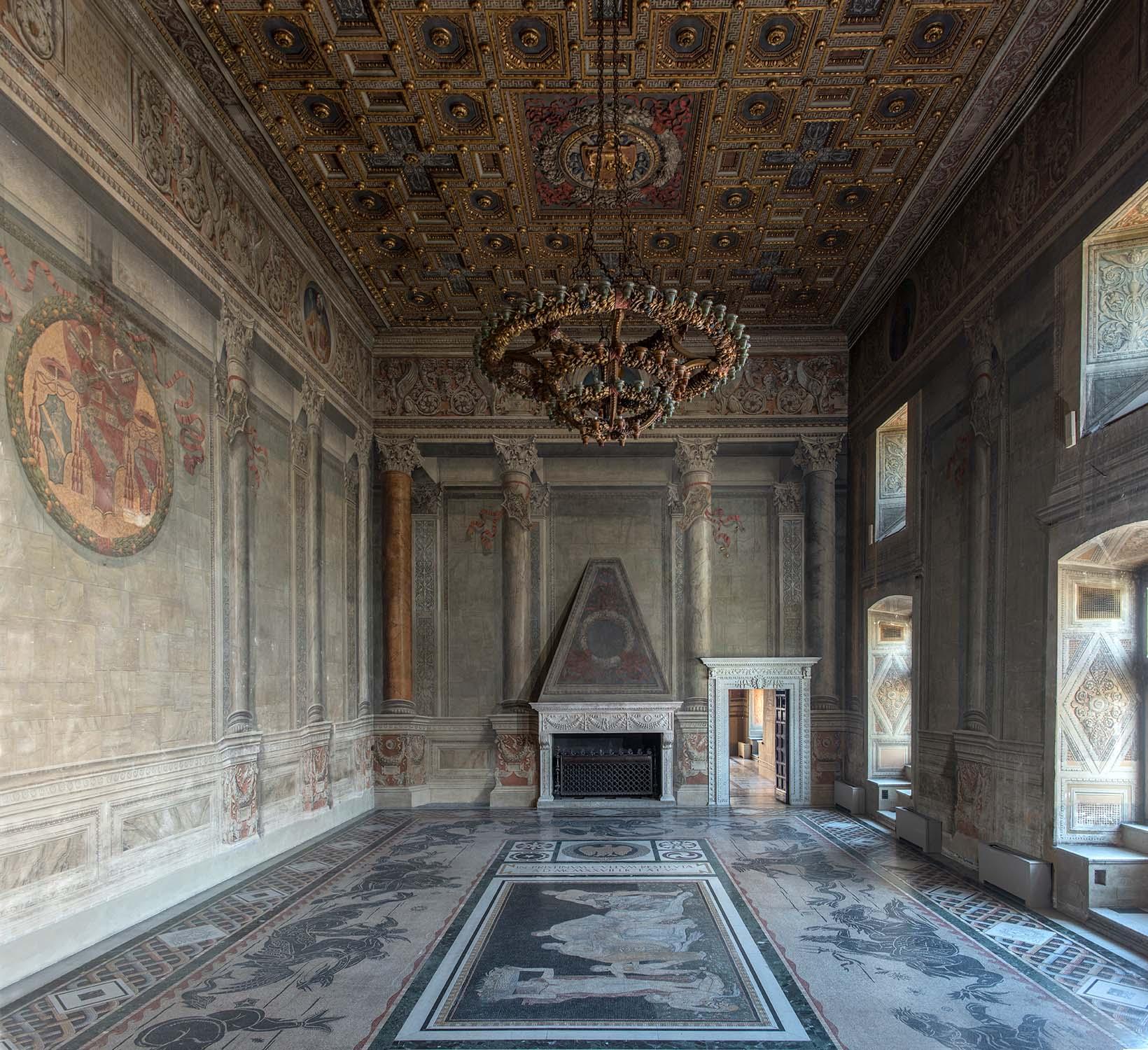 Decorated in the second half of the fifteenth century, the room underwent numerous changes in the seventeenth and eighteenth centuries. Beginning in 1917, the art historian, Federico Hermanin (1868-1953), then Superintendent of the Galleries and Museums of Lazio and Abruzzi, restored the fifteenth-century layout and rearranged the space to look like a Renaissance residence. The Renaissance-style layout was dismantled after World War II, and the room is admired today for the grandeur of the space and its decorations. 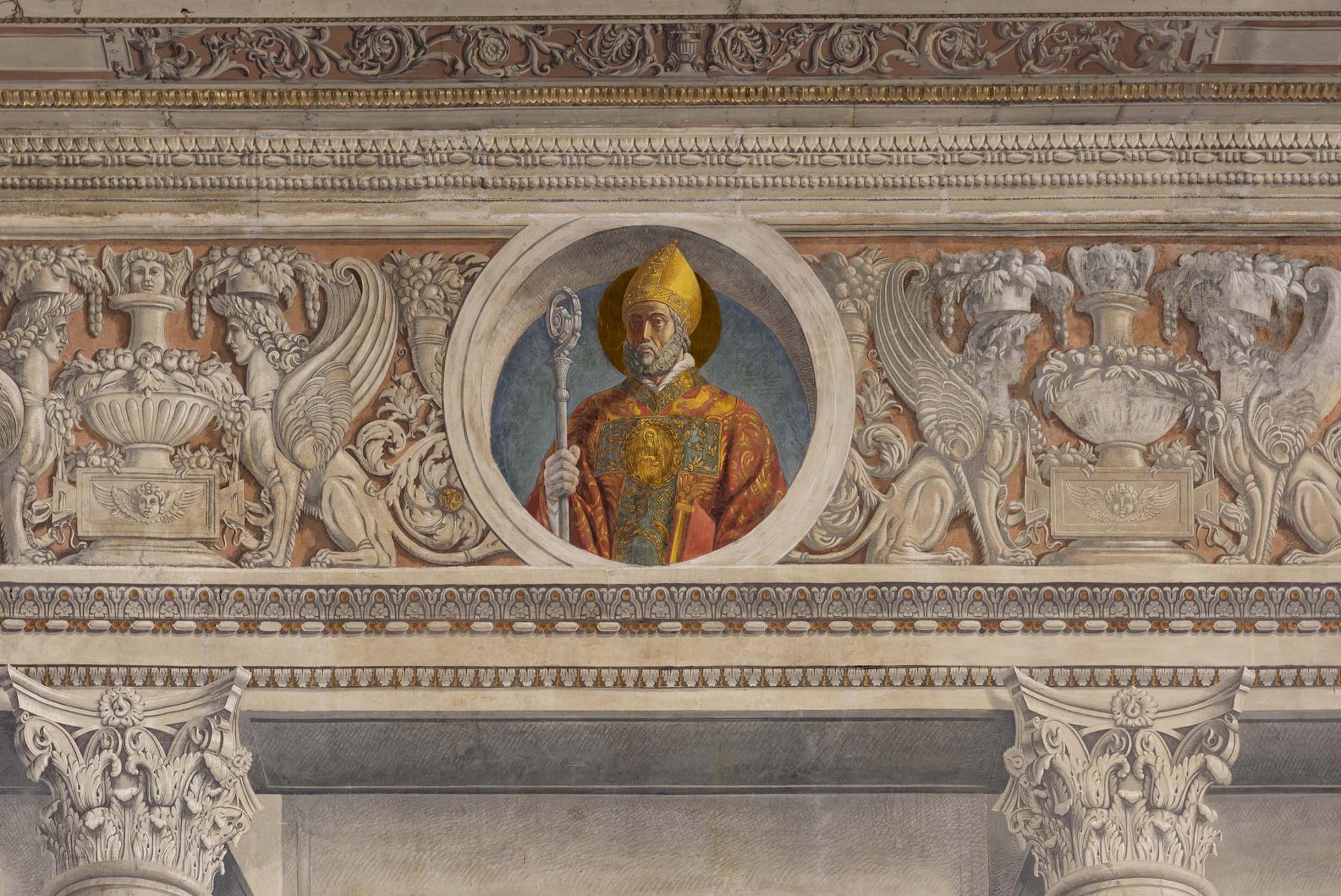 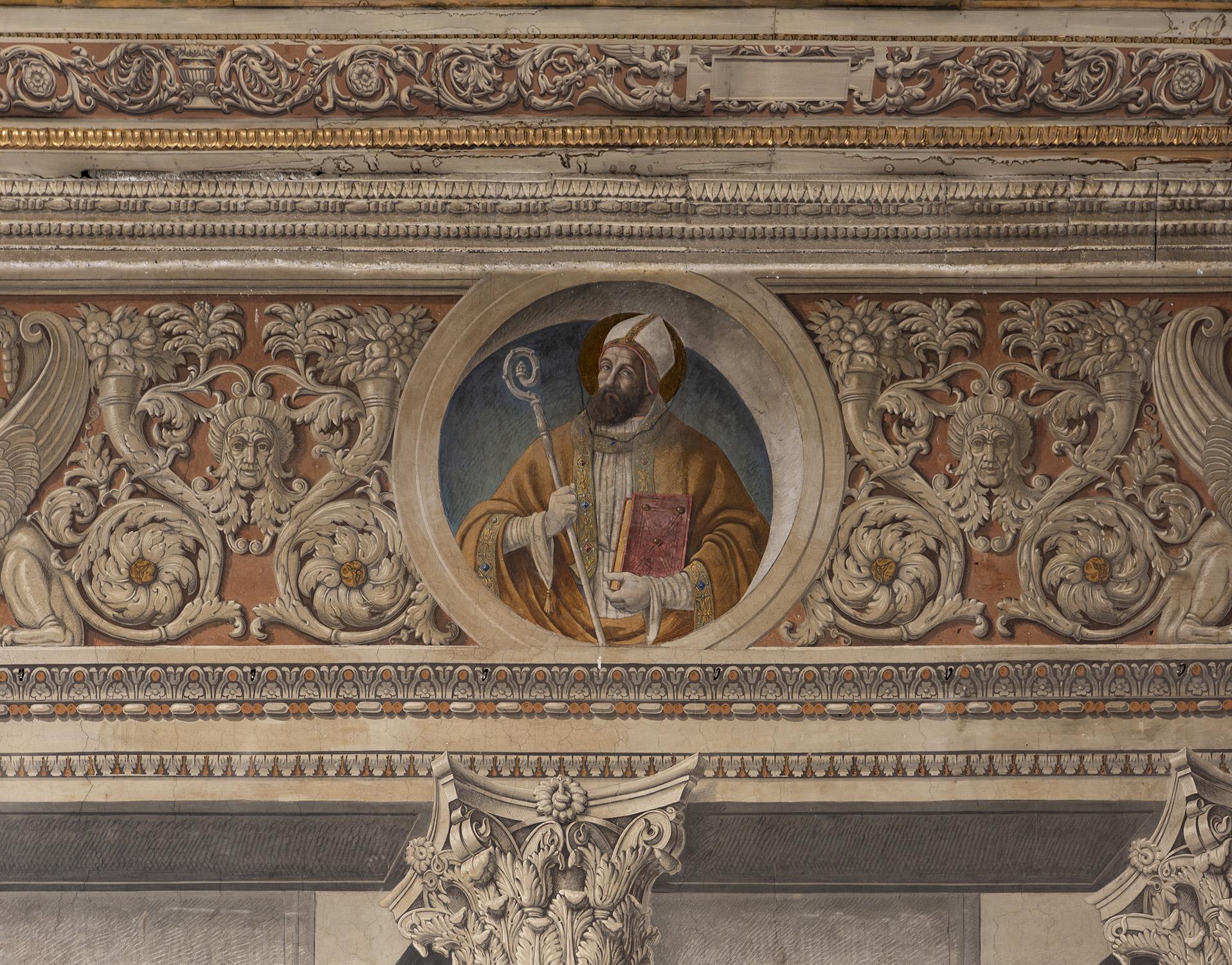 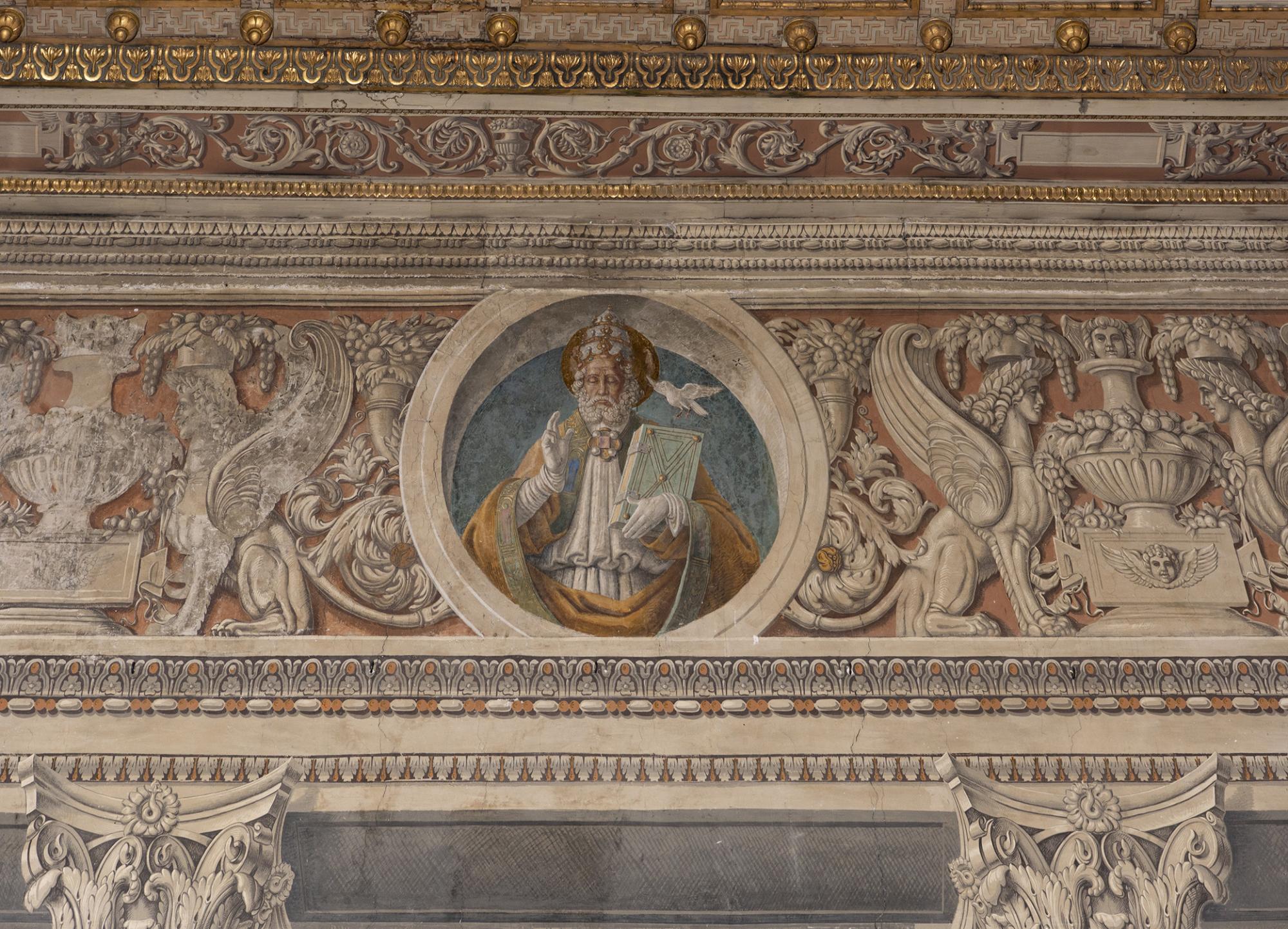 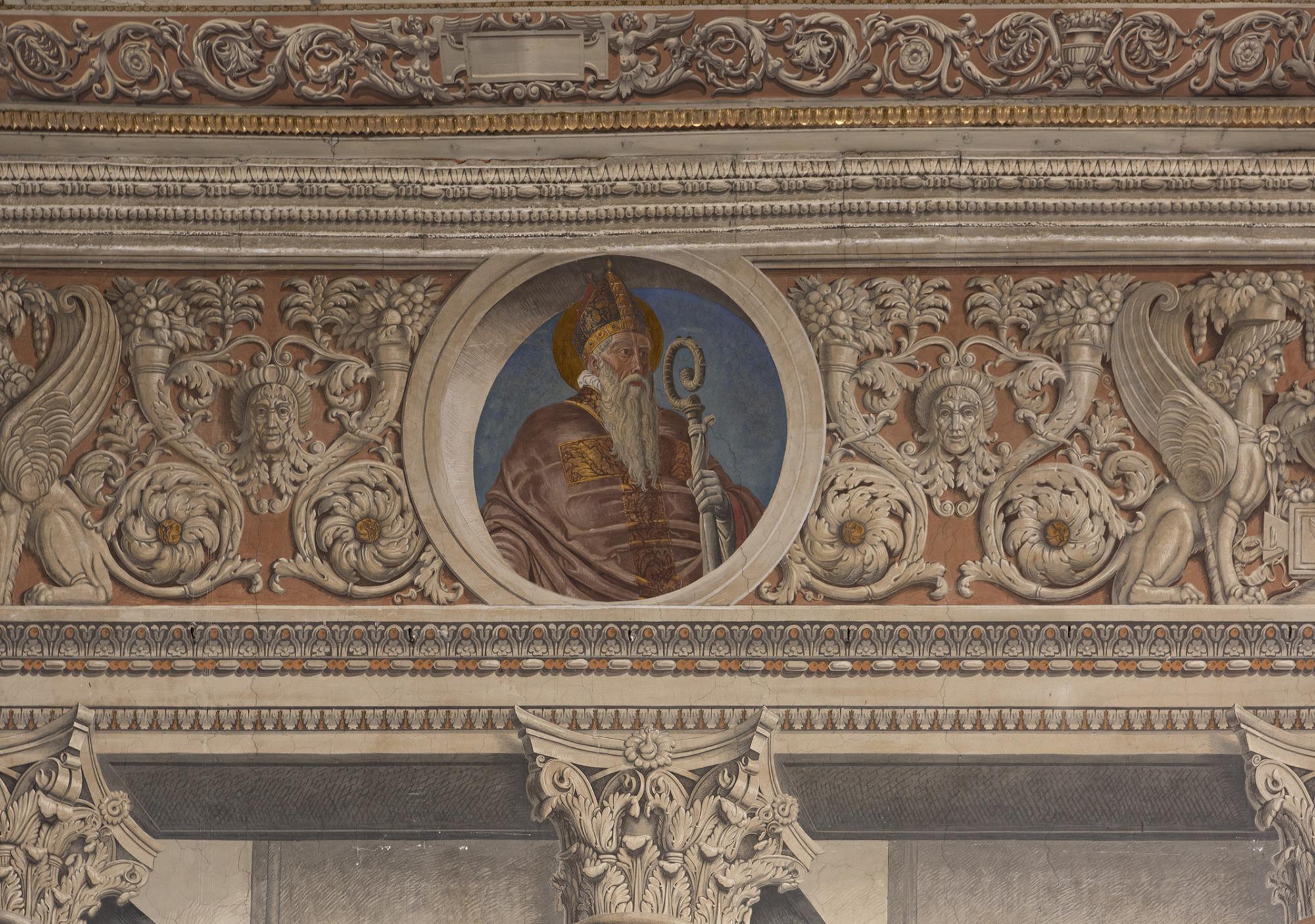 The walls feature fake architectural details that create the illusion of an even larger space. These details include a portico with eight columns on bases in the form of a classical temple and a frieze decorated with medallions with the Doctors of the Church. This decoration, started under Marco Barbo (1420-1491), was completed by Lorenzo Cybo (1450-1503) during the pontificate of Innocent VIII (1484-1498), as the three coats of arms on the western wall record.  Subsequently whitewashed, or rather, covered with a layer of plaster and painted over with other images, it was brought to light in the first decade of the twentieth century: Federico Hermanin salvaged the few surviving fragments, attributed them to Andrea Mantegna (1431-1506) and entrusted their restoration and reintegration to the painter-restorer Giovanni Costantini (1872-1947). 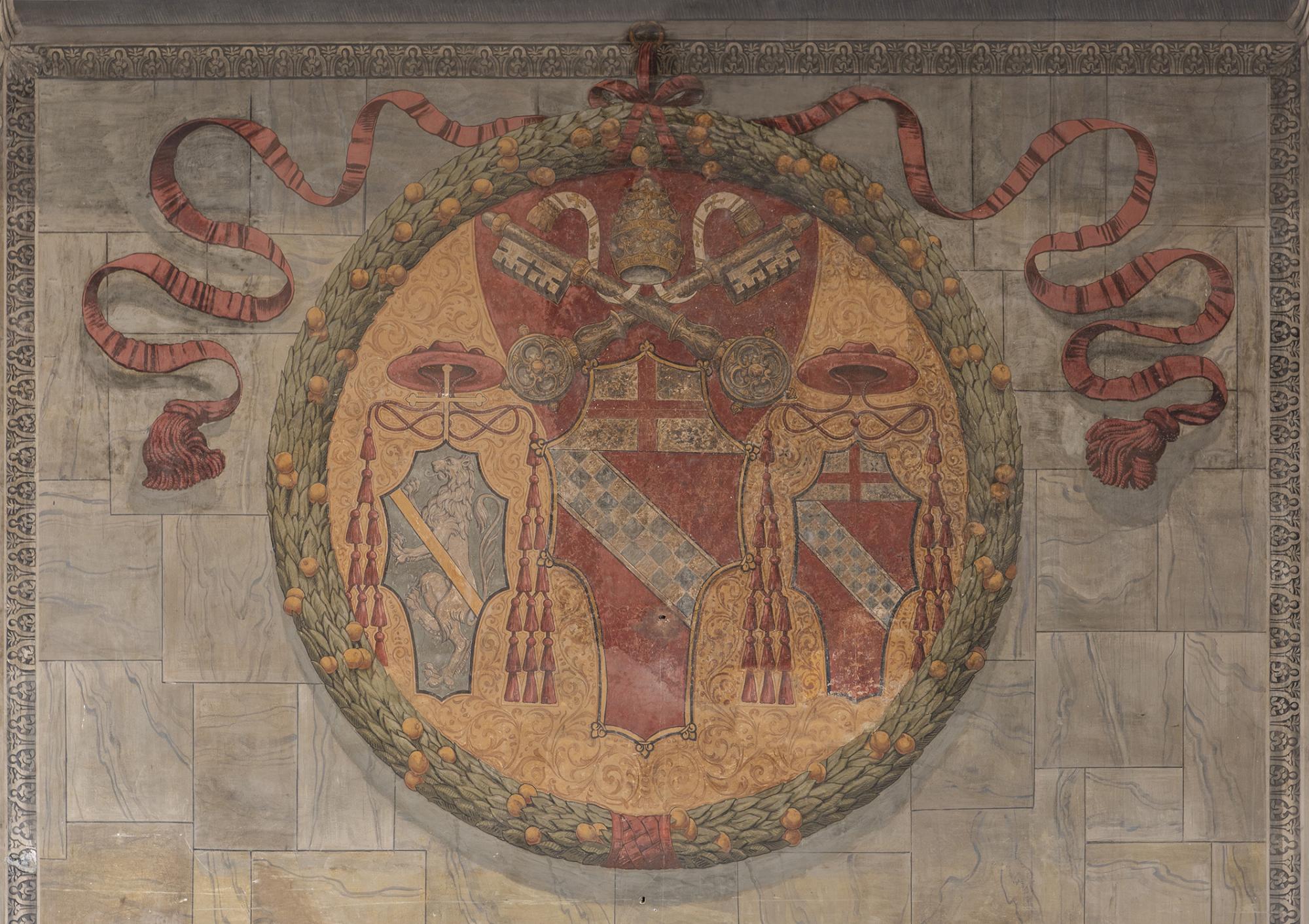 The door casings and the monumental fireplace bear the cardinalate coat of arms of Marco Barbo and are attributable to his patronage. Embellished with a frieze containing ribbons, leaves and fruit, the fireplace has been attributed to Mino da Fiesole (1429-1484) and Giovanni Dalmata (1440-1515). 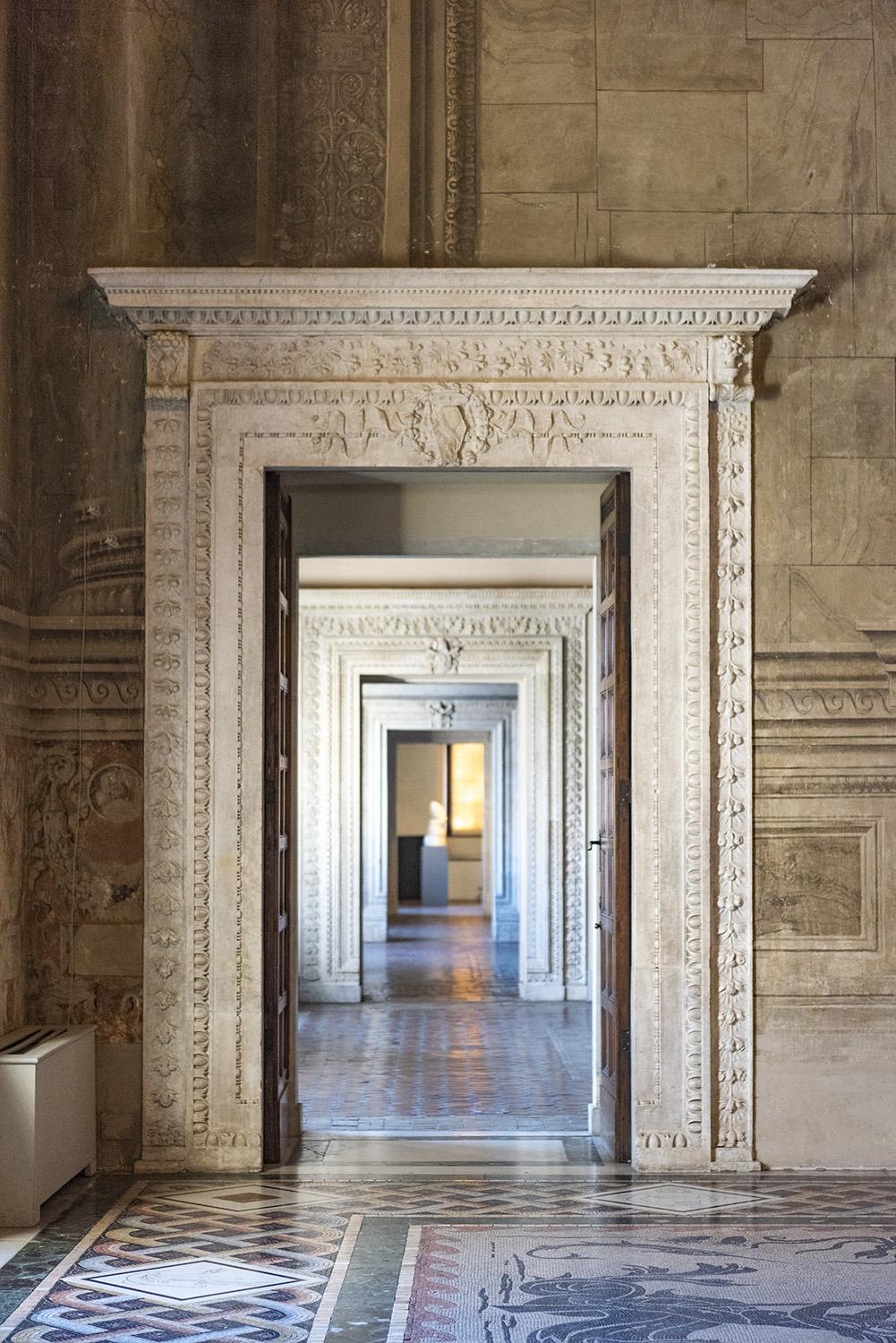 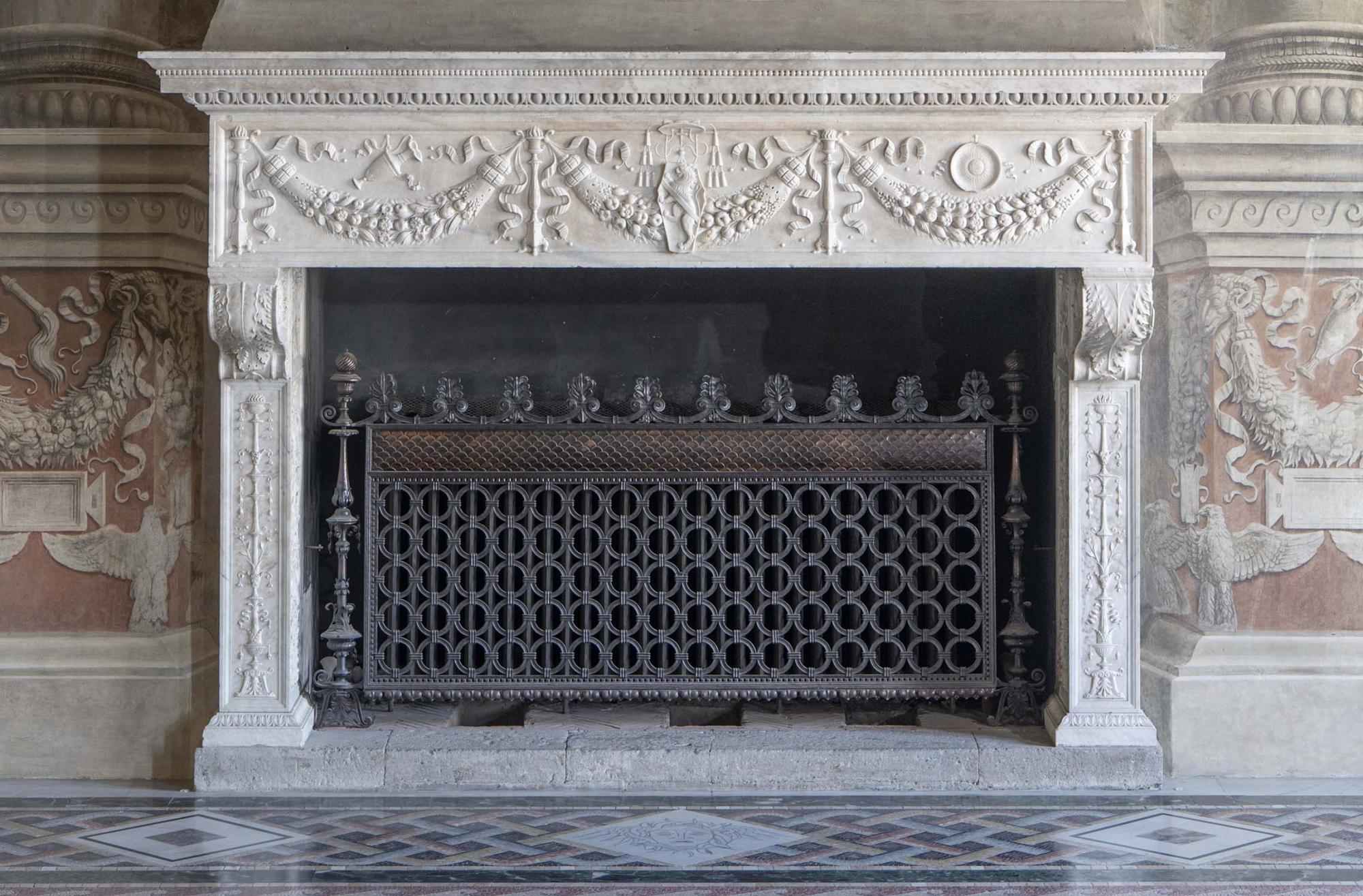 A series of windows pierce the western wall: one of these, along with its marble balcony, was added in 1715 at the behest of Ambassador Niccolò Duodo (1657-1742). This allowed the residents and guests of the palace to enjoy a magnificent view during the Carnival celebrations, especially of the arrival of the Berber horse race.

The ceiling, the chandelier and the mosaic floor were added during the 1920s by Frederick Hermanin. The ceiling is based on a model from 1496, which still exists today in the church of San Vittore in Vallerano, near Viterbo: the only difference, besides the size, being the addition of medallions with the coats of arms of Rome and Venice. Only a single coffer from the original ceiling remains, now exhibited in the Barbo Apartment. 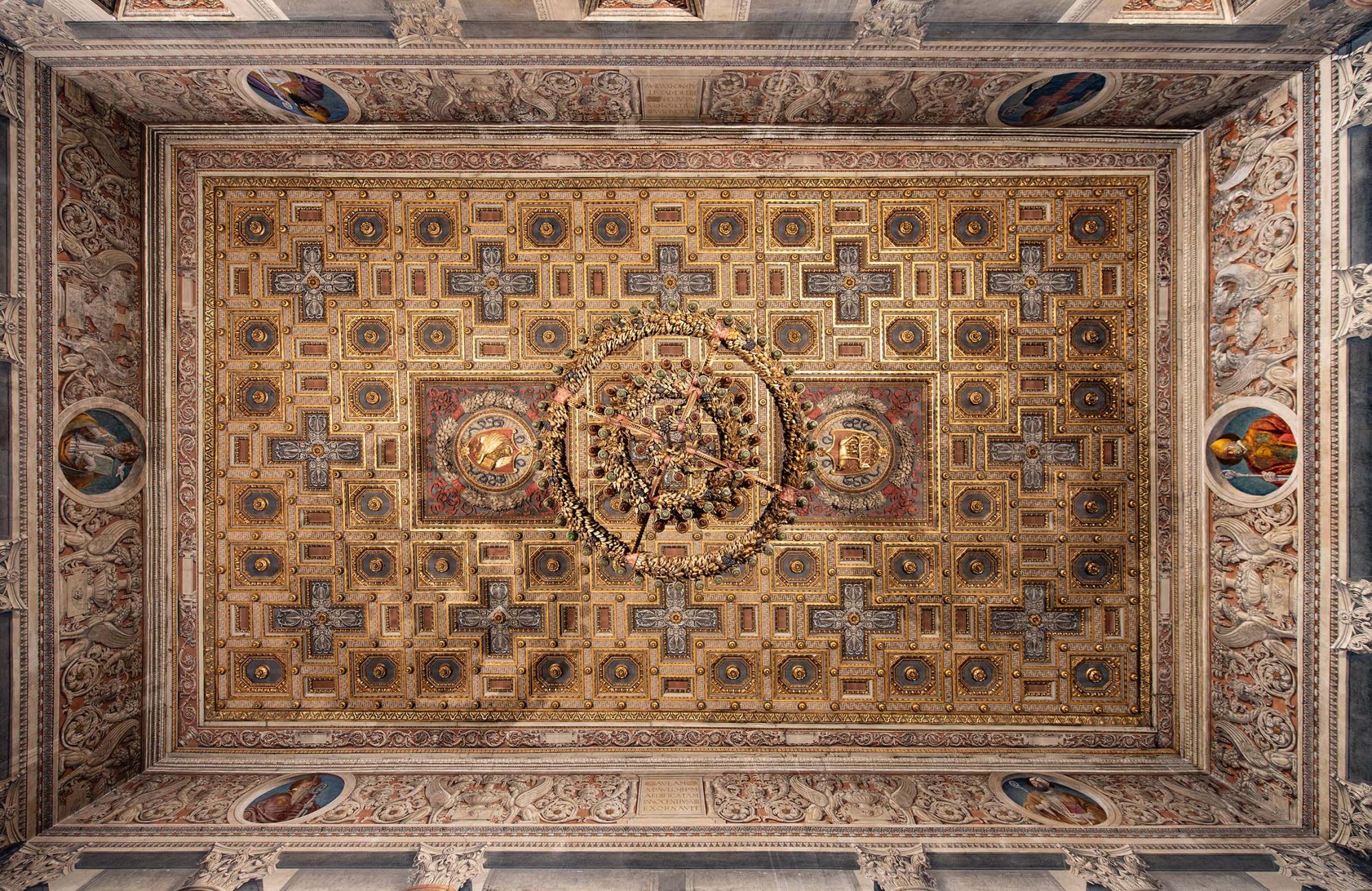 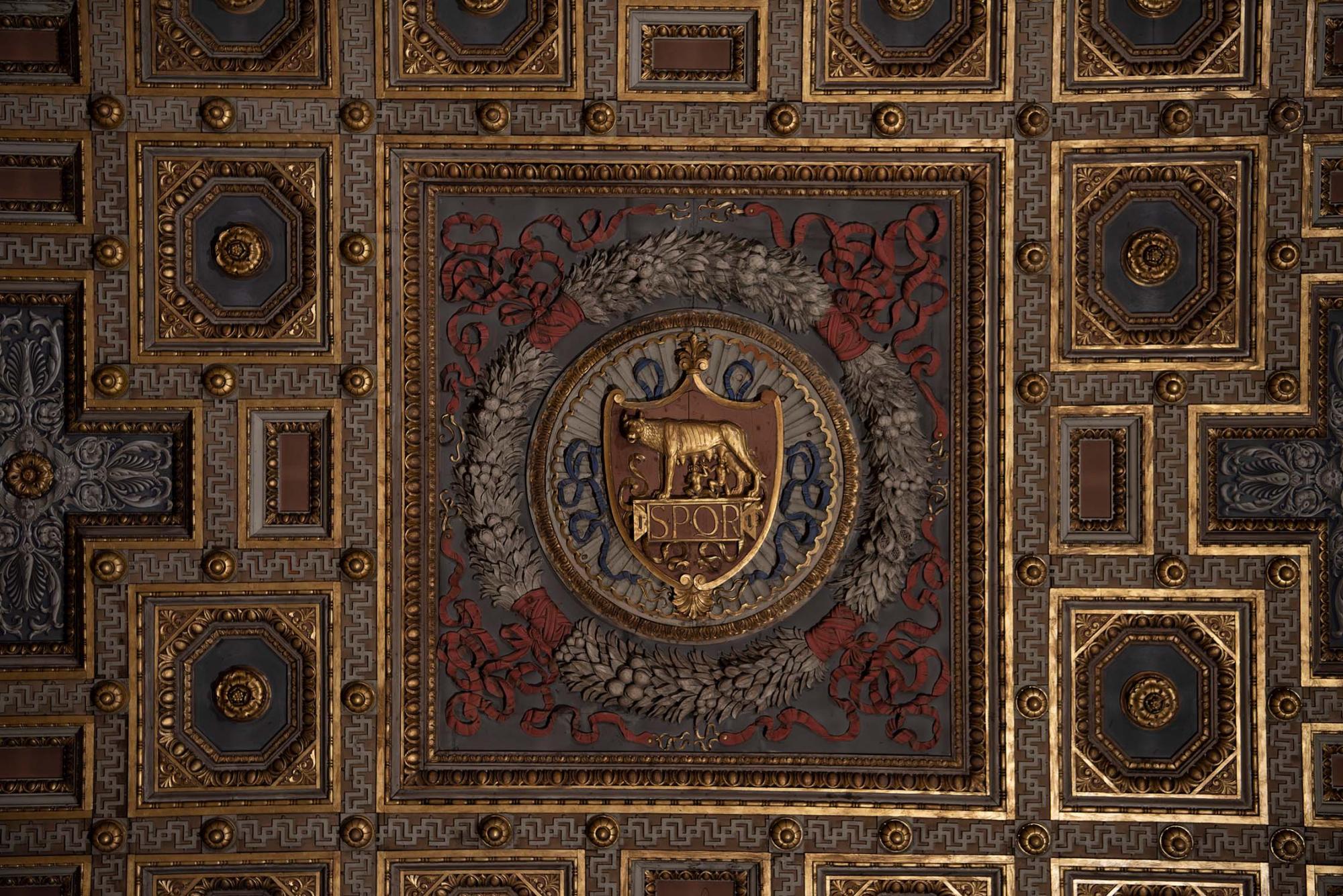 The floor, the work of Pietro D’Achiardi (1879-1940), depicts The Rape of Europe with marine gods and zodiac signs along the border; it was inspired by the mosaics in the Baths of Neptune in Ostia Antica. 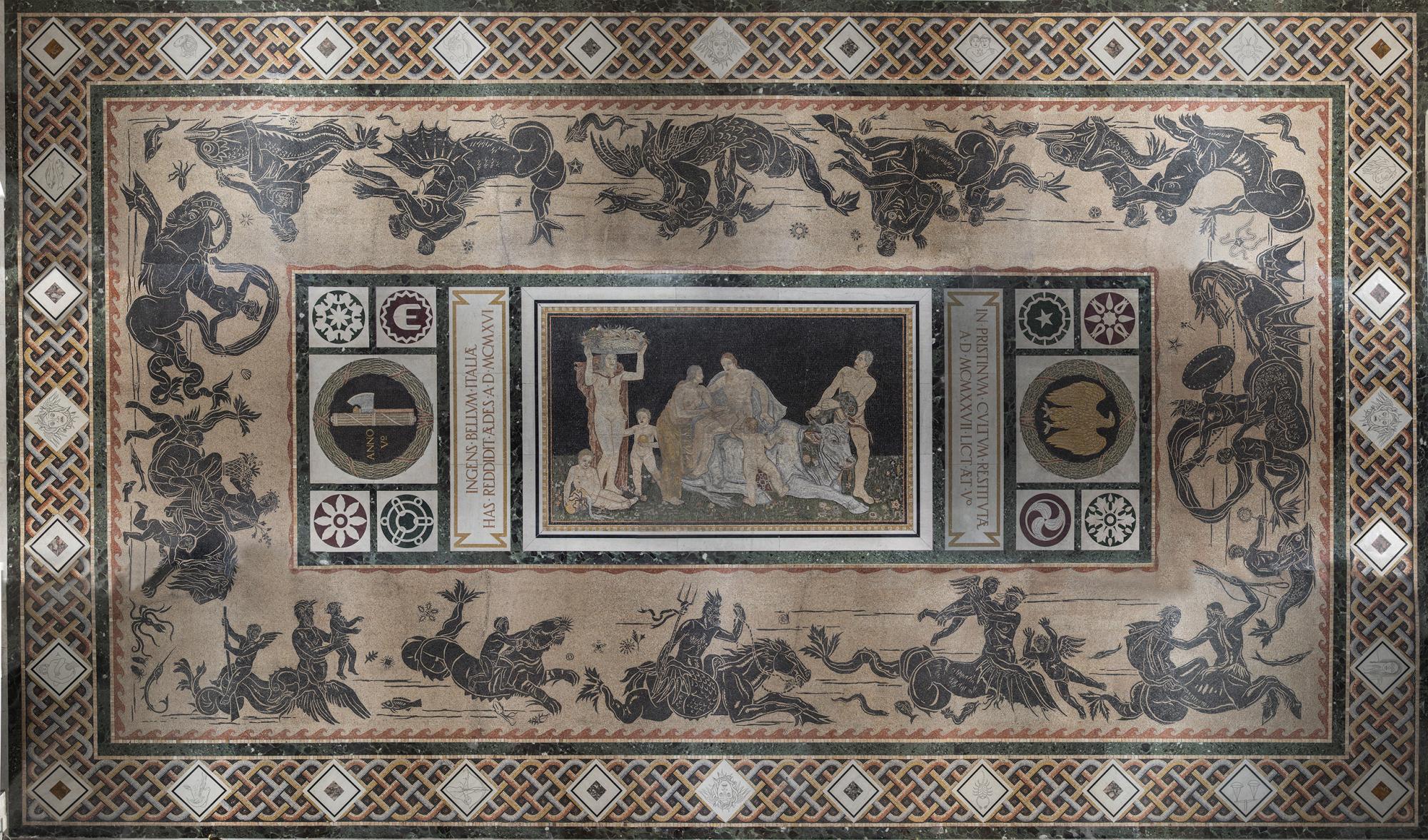